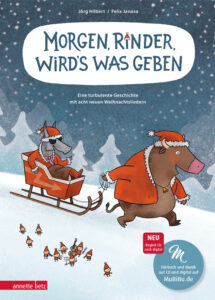 A turbulent story with eight new Christmas songs by Felix Janosa (including CD and for streaming).Donkey and his buddy Ox don’t want to sit around and make Christmas stars. They want adventure! So without further ado, they steal one of the sleighs that Santa’s wife Henrietta Lametta parked in front of the door. But as it gets colder and colder and their stomachs growl, their adventure suddenly isn’t so much fun anymore. In the end, only a small Christmas miracle can help …
A delightfully offbeat Christmas story from the successful team behind „Ritter Rost“ and „Der Schweinachstmann“. With eight great new Christmas songs, sung by the acapella ensemble Quintense. 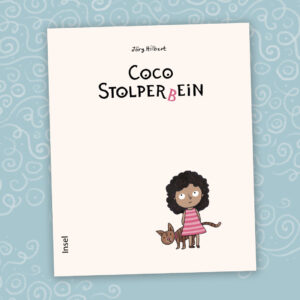 New people moved in and calamity, it was the Stolperbein family … Mrs. Right and Mr. Important live side by side peacefully and amiably – everything is in order: the lawn is trimmed, the car is parked properly, and naturally it is clean. Until one day the attic is converted and a new family moves in: the Stolperbeins, including their cat and their daughter Coco. And Coco brings a great deal of messiness into the wonderful order Mrs. Right and Mr. Important have created …

In catchy rhymes, children’s book author Jörg Hilbert tells a story of living together in our colourful society, of acceptance and of friendship. 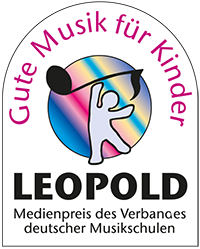 Media prize LEOPOLD for ”Knight Rusty and the Magic Book”

Yet again, Ritter Rost was awarded this important German award for good children’s music. From the citation: “Who must we be dealing with when we talk about cereal with thumbtacks and paper clips, a forest of mythical creatures, King Leadfoot or a Talking Hat? That’s right – we are in the Iron Castle of the Knight Rusty with his caste maiden Bo and house dragon Koke, who have already faced countless crazy adventures together. This time, Koke takes advantage of the absence of the two „grownups” – Bo redeems her birthday voucher for a dance evening with Rusty – to try out spells and magic recipes from an exciting book he discovered on the library shelf of the castle. However, much like Goethe’s „The Sorcerer’s Apprentice,“ the disobedient dragon gets himself into quite a bit of trouble. (…) With a tongue-in-cheek look at typical everyday situations, couple and family conflicts, with inexhaustible wordplay and the matching catchy yet musically clever songs, the production is once again a guarantor for great family entertainment.“ 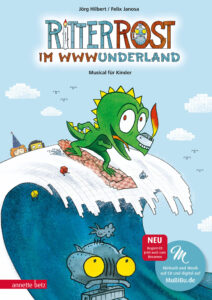 Countless packages are piling up in the Iron Castle, making it almost impossible to get in the door. When Koke and Bo go to check what Knight Rusty is up to again, he is nowhere to be found. So, they set off to WWWonderland on a mission to find Rusty. Once there, the two are amazed at all the things they can discover there. With the help of Lisa Level and the all-knowing Gugula, Koke and Bo finally find the knight. But before all can be well, they must first defeat a powerful foe. 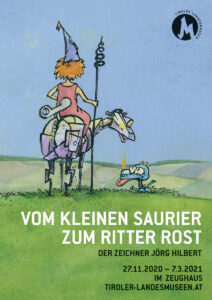 A knight has to be strong, bold and noble. Jörg Hilbert found that too much of a stereotype and invented Rusty Knight instead – weak, timid and rusty. In the exhibition, the clumsy knight, whose adventures can now be followed in more than 30 children’s books, radio plays and films, stumbles through the Museum im Zeughaus. Castle Maiden Bo, King Leadfoot, Pretentious Prince, Wicked Witch and many other characters are accompanying their friend or rival.

The little dinosaur from Hilbert’s first, but unpublished children’s book, will also be making a first appearance. The dinosaur has close ties with Innsbruck, as the originals were kept for decades by Hilbert’s great role model and patron, the late Paul Flora, be-fore being made available for the exhibition by his family. Later the little dinosaur developed into Fire Dragon Koke, who is now getting into mischief with Rusty Knight.

Adults and children aged four and above are invited to the mu-seum for the exhibition. It remains to be seen who will enjoy the exhibits more. 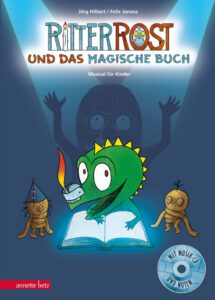 A novel magical adventure on the trail of Goethe’s Sorcerer’s Apprentice with Knight Rusty, the castle maiden Bo and the fire dragon Koke for children from the age of 4! Including many new songs to sing along, reenact and enjoy. It’s no use moaning – today, Knight Rusty has to go dancing with castle maiden Bo. At least, that’s what the voucher he once gifted her says. And Koke? He is supposed to stay in the castle and go to bed early. “There’s no way”, the little dragon thinks. Earlier, he discovered the Secret Book of Magical Moments in the library. Nothing but secret spells are written in there. Of course, Koke can’t resist… and so the magic takes its course.
Imagination, humor and a lot of music are the secret recipe for the Knight Rusty musicals. On the CD which is included in the book you can find many songs to sing along, reenact or simply listen to. 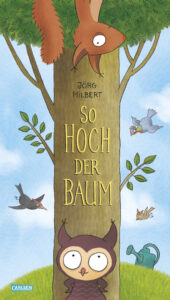 The Tree so High

Sir Squirrel has so many neighbors: Mr. Knockstick, Aunt Turtledove, the Peep family, Grandma Snailhat, Master Mole and of course the friendly owl Kathy. Together they search for Sir Squirrel’s lost hazelnuts. Meanwhile, they explore nature: they visit forest, pond and field – even the underworld. There’s so much to see. But can they find Sir Squirrel’s hazelnuts? You better go and check again! A poetic animal parable for children about the various animals living together in a tree.